An introduction by Hannah Blumas

The installation BYCATCH, by the Berlin-based artists Abie Franklin and Daniel Hölzl, investigates permeable borders between human and non-human agents. Intertwined natural phenomena like pollution, shifting landmasses and the rise of the sea level juxtapose human-made strategies of defence and (self-) destruction. The hybrid landscape offers participants an immersive experience while reflecting: what is a soft, hard or porous border? How can those boundaries be crossed, relocated or removed? And what bycatch are we willing to accept in the process?

The floating installation consists of inflatable tetrapods bound by a safety net. The inflatables mimic mass-produced breakwaters developed in the 1950s to protect coastlines against erosion. Yet placing these concrete structures has choked countless ecosystems worldwide, including Danish coasts and wetlands. In Japan, for example, as much as 50 per cent of coastlines are smothered in them[1]. The term bycatch derives from the fishing industry's need to describe things caught by accident - like dolphins entangled in towing nets while fishing for Tuna. It shows the dilemma of trying to catch a quick solution, only to find it leads to other problems down the line.

Breakwaters used to be synonymous with protecting human spaces. However, a new understanding of aquatic environments and their biodiversity has led to alternatives. Such as novel sponge-like structures implemented to soak up water instead of merely displacing it. One way to measure the bycatch of breakwaters is in the volume of water they displace, speeding up the disappearance of the very places they are supposed to shield. Nevertheless, they remain, forming countless underwater graves of abandoned architectural artefacts. In BYCATCH, the volume of the form remains the same while converting the material from polluting concrete to air. The objects undergo a revitalisation that explores their potential as connectors rather than separators. Instead of scattering energy, they generate a new form of resilience by interacting with their environment rather than opposing it.

This manifestation of an object-oriented perspective makes “hyperobjects” visible. Timothy Morton argues that a shift in time and space is necessary for processes and phenomena to be perceived as objects[2]. Both familiar and alien to us, some examples of hyperobjects include weather, currents and light/radiation. The most significant example of our time is global warming. Hyperobjects have a dramatic quality: where they occur, irreversible change has already happened, leaving us with coping strategies. Following Morton, humans need to radically rethink how they conceive of - and relate to non-human living beings and nature as a whole[3]. Donna Haraway describes the often inadvertent relationships between human and non-human beings as entanglements. Only interspecies connections can sustain life in a dying world[4]. BYCATCH points out the lack of vision for a new concept of nature in the Post-Anthropocene - a world after humans have become the dominant force shaping the planet. It negates bulky immobility with ongoing change and repurposes the tetrapods as a sensual aid to experience hyperobjects and entangled connections.

Tetrapod(a) is a biological term to describe terrestrial vertebrates with four limbs. These quadrupeds include the very first amphibians, mammals and even humans. Around 390 million years ago, vertebrates crawled out of the oceans to conquer the land as a habitat[5]. Due to the exhaustive settlement and depletion of resources, the descendants of tetrapods are being driven back off dry land, catalysing unknown evolutionary processes.

The work is produced using long-lasting, recyclable PVC foil and is locally manufactured by geo - die Luftwerker. A company that has produced works for artists like Maurizio Cattelan, Christo and Jeanne-Claude and Tomás Saraceno. The idea of modular interchangeable layouts was developed in close partnership by Franklin and Hölzl. Both artistic practices focus on materiality, temporality and spatial interactions.

BYCATCH can be installed on water, land, and anything in between. The formalistic minimalistic tetrapods give no orientation: no top and bottom, revealing countless layouts and compositions of space cavities. A haptic green net is playing with and around those cavities. The net originates in construction work and is used to catch people in the event of a fall. It serves as a proactive measure when guaranteed prevention of falls is unavoidable. According to Hito Steyerl, society is in a state of free fall, manifested by "a prevailing condition of groundlessness"[6]. This state is difficult to grasp when everything is falling. The horizon becomes lost in lines as boundaries dissolve. "Falling is corruption as well as liberation, a condition that turns people into things and vice versa"[7].

In BYCATCH, participants and things find themselves navigating between stability and free-falling. The work stretches and reacts as one interconnected floating structure, extending to the coastline. You are invited to nestle yourself in the installation and softly watch the tides come in and out, to playfully climb on the components, feel your weight and input on them, or examine them from afar. With your participation, the installation becomes a constantly evolving interface of (non) human interaction, redefining borders and reflecting our bycatch while falling towards an unstable ground. 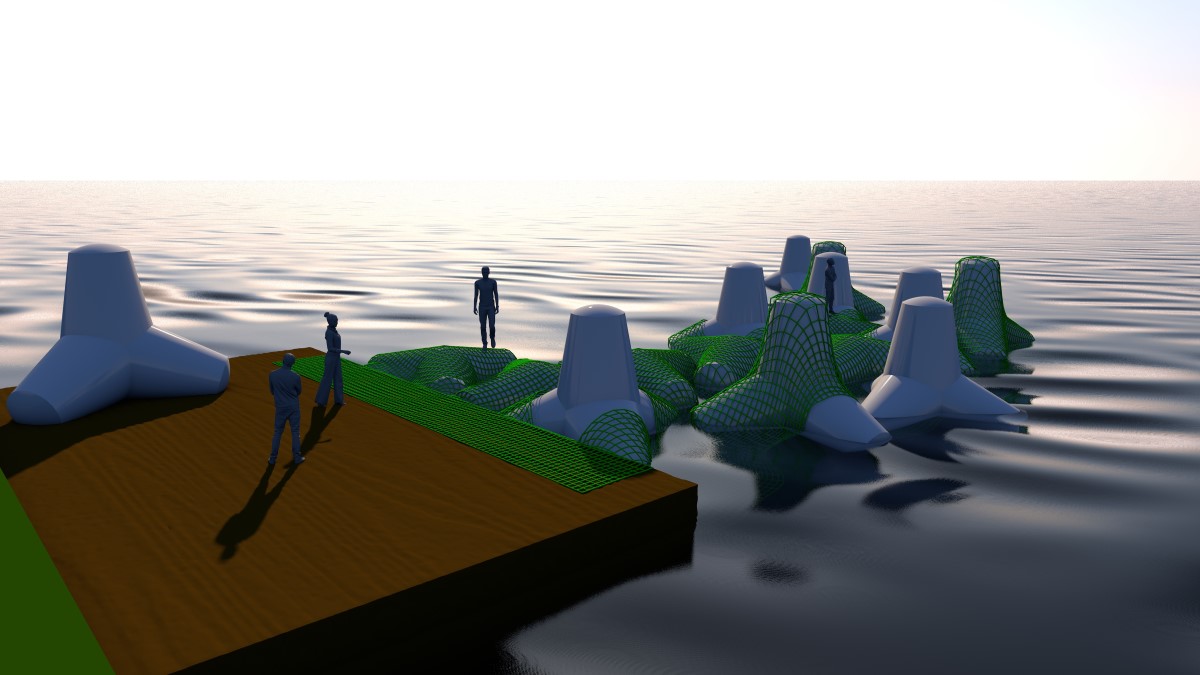 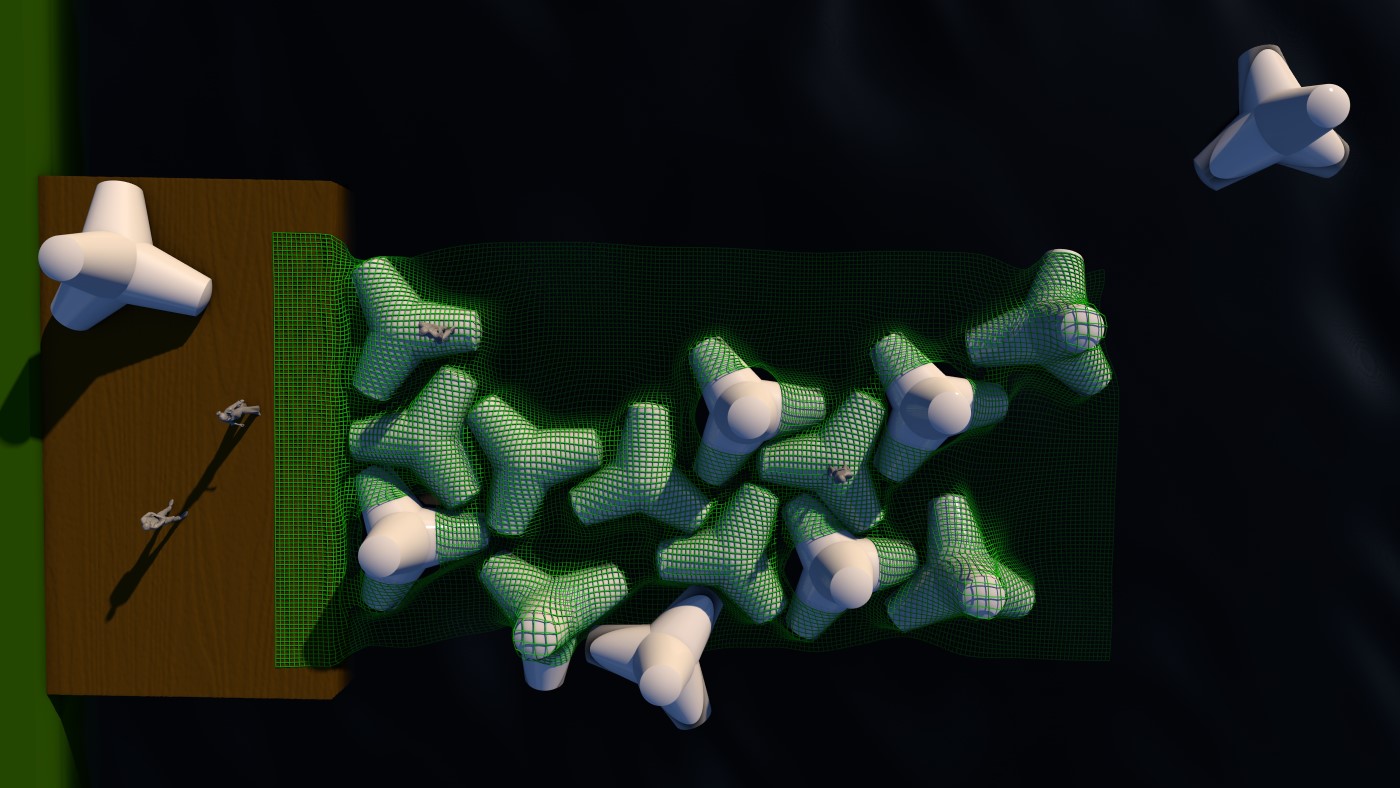 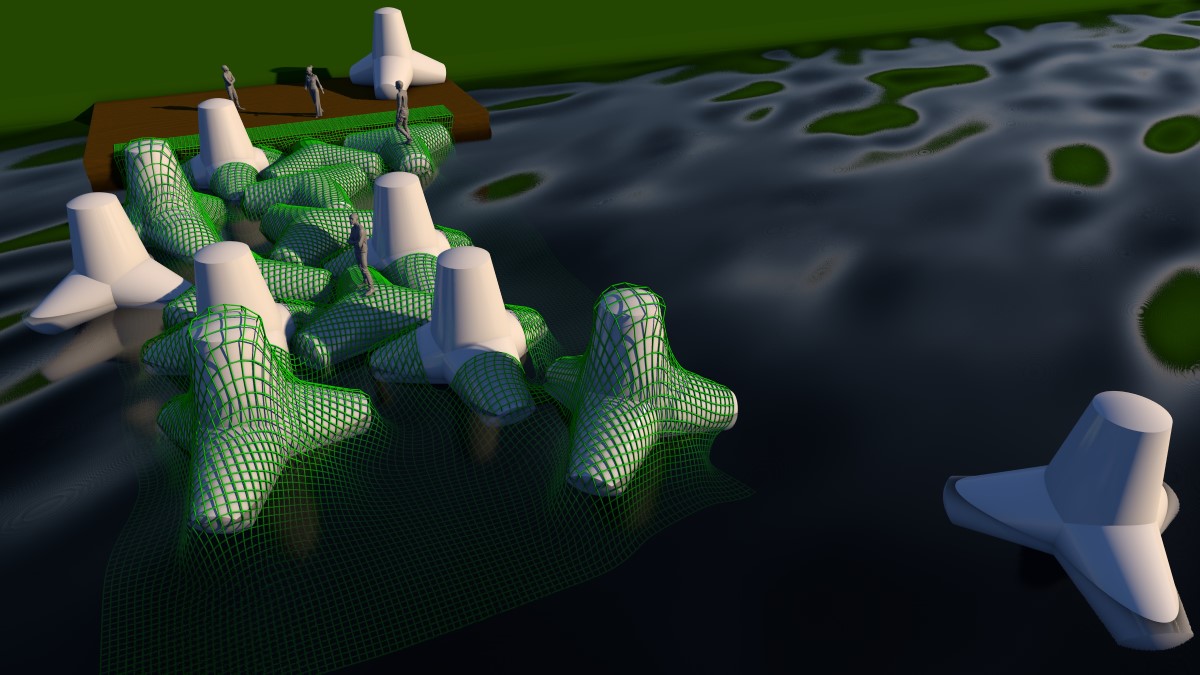 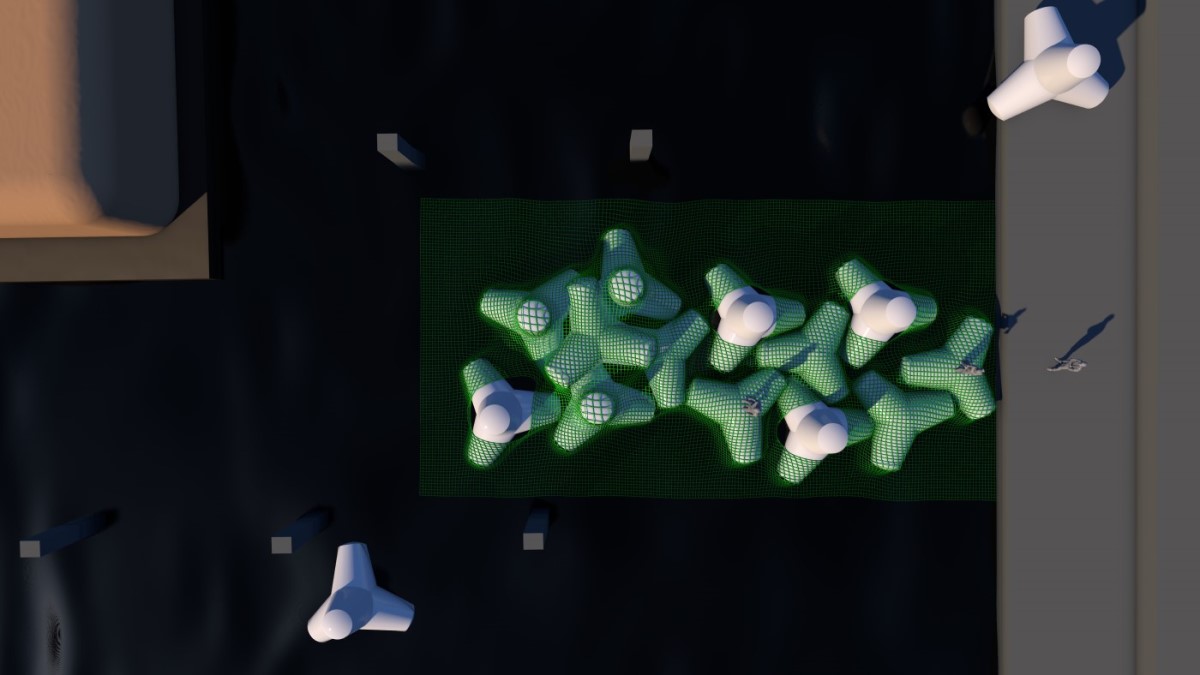 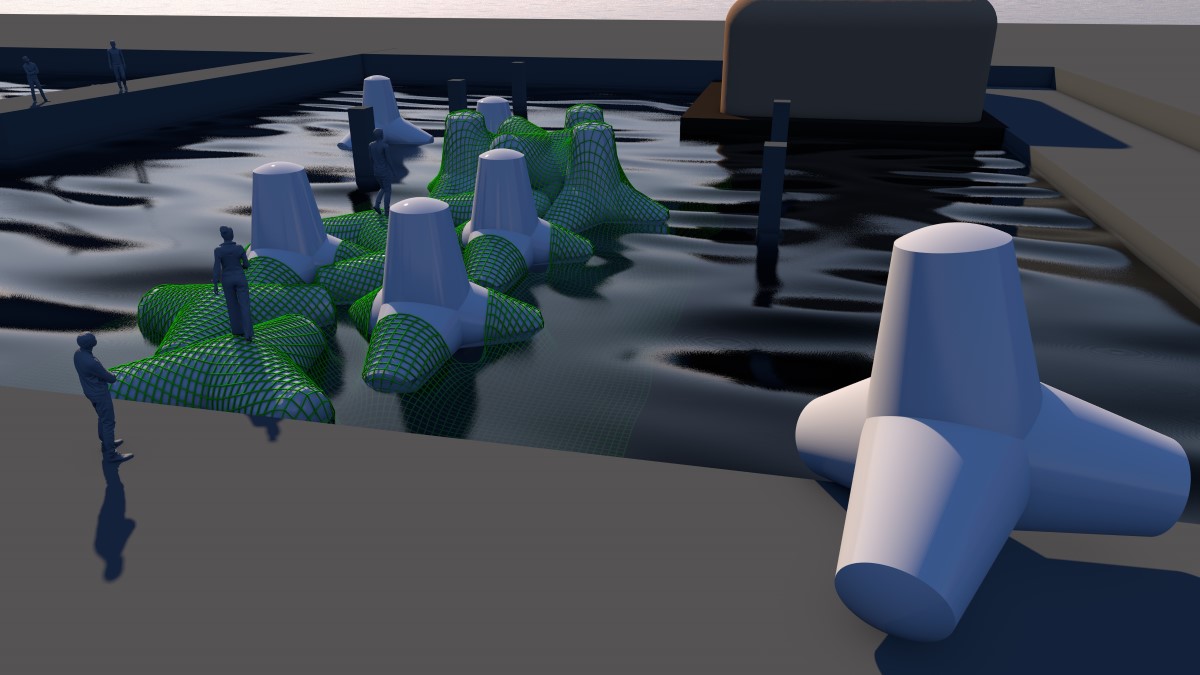 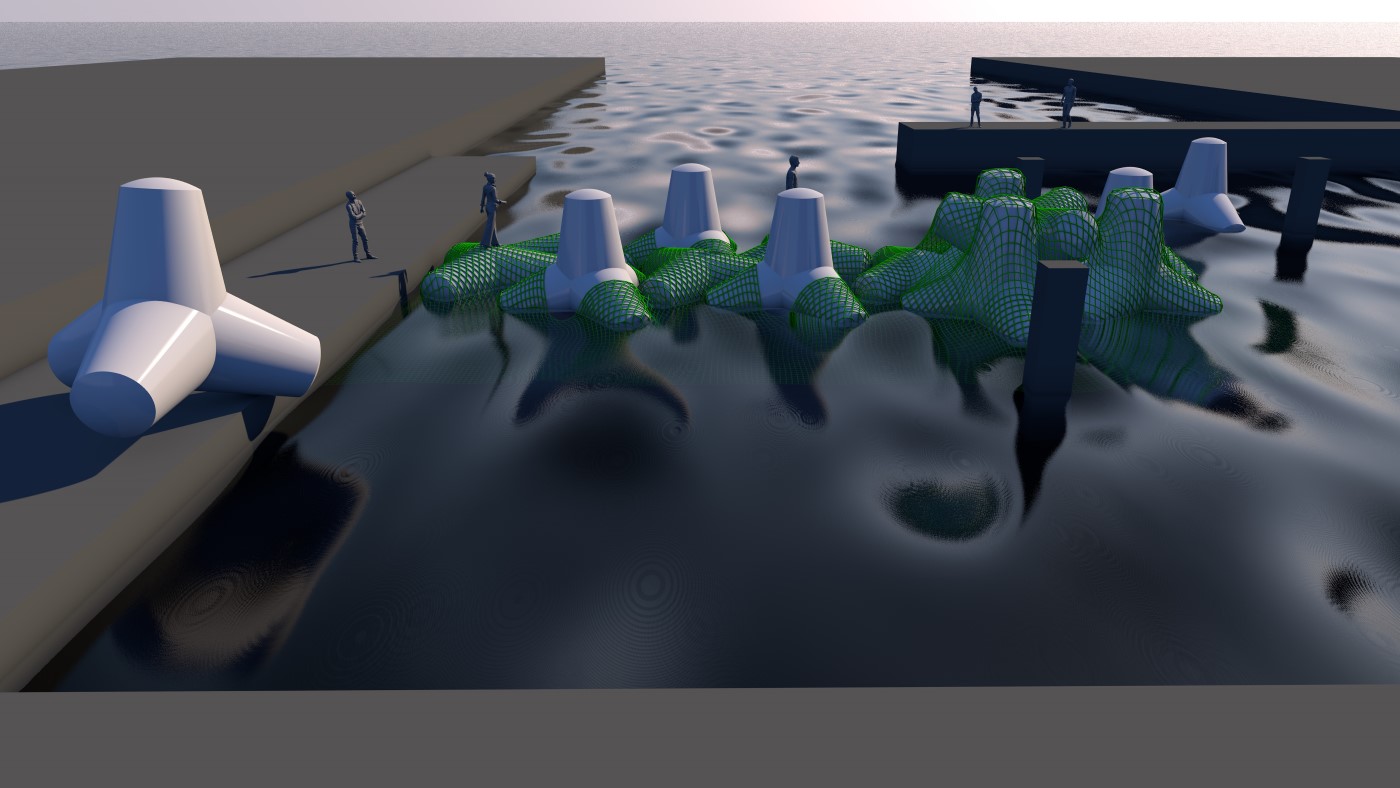 [2]Morton, Timothy Bloxam (2013). Hyperobjects: Philosophy and Ecology after the End of the World. USA: University of Minnesota Press.

[3]Morton, Timothy Bloxam (2013). Hyperobjects: Philosophy and Ecology after the End of the World. USA: University of Minnesota Press.